NEW LONDON, Wis. — When Brent Erdmann received his annual Kwik Rewards Year In Review email at the end of 2019, one number jumped out more than the others.

In the email that lets Rewards members know how many visits they had, how many gallons of gas they pumped, or what their favorite item to purchase was, Erdmann was most intrigued by the stat that showed that he had visited 93 stores during the calendar year. With that number in mind, he created an unofficial contest in his mind.

In 2020, Erdmann visited 615 stores across the Kwik Trip family, setting what has to be a record, although official data on such a record doesn’t exist.

“While not part of the (Gold Rush) program, I thought it would be neat to try the feat,” said Erdmann, who estimated that he put about 50,000 miles on his car during 2020. “I also remember the Kwik Trip Social Media Team making Tweets about if anyone has ever tried it.”

While the current count of stores is over 750, hitting 615 in one year certainly shows an impressive level of commitment.

“I also knew that not many would even try to go to every store since some people simply either have better things to do,” said Erdmann, adding with a laugh, “or they’re are not that crazy as I am.”

Erdmann, 27, currently works as a Locomotive Engineer for Canadian National Railway in Fond du Lac, and said that he takes advantage of nearly everything Kwik Trip has to offer, from coffee in the morning, no-fee ATMs for weekly cash, or a take-home meal at the end of the day. He also noted that his travels were powered by fried chicken and Bigs Dill Pickle sunflower seeds, as well as Brisk Raspberry iced tea, Sun Drop and Red Bull. 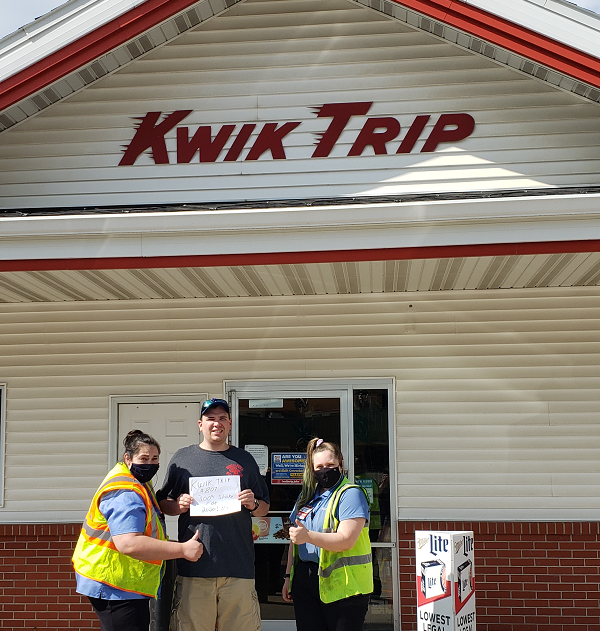 “I tend to buy my milk and eggs from Kwik Trip,” Erdmann said. “I am not one that likes to spend an hour at the grocery store so if Kwik Trip has it, I get it there.”

Reaching that many stores did take some serious planning, as Erdmann created a Google Map to track his progress.

“When it came to short and local trips, I could fit many in with other daily activities and duties,” Erdmann said of the stores close to his home in New London. “When it was hour-long or multiple-day road trips, planning a route to make sure each was accounted for got a little difficult.”

He thanked his girlfriend, Melissa, and close friend, Matt, in assisting with his plan and ensuring his numbers were up to date, and also for being companions on dedicated Kwik Trip road trips. His longest trip was to western Minnesota, where he stopped at Store #944 in Willmar, which Erdmann said was 5 hours, 41 minutes from his home, a mere 345 miles away.

“In June, Matt and I ventured out to Waterloo, Iowa, and along the way, we found a fireworks stand that was open,” said Erdmann. “By the end of the next day, we ended up stopping at six fireworks stands and the back of my truck was full.”

The pandemic did affect Erdmann’s plans a bit, as changes in his work schedule allowed the team to cover more ground in their endeavor.

“As time went on, I knew I had a goal and wasn’t going to let (the pandemic) get in the way anymore,” said Erdmann. “I also was furloughed throughout the summer which helped see new areas, and Melissa and Matt got to see some new territory in the adventure, too. I also used this to keep an upbeat and positive attitude during a challenging year.”

To rack up as many stores as possible, Erdmann closed out the calendar year in particularly impressive fashion, visiting 71 stores across three states in two days.

“I went on an around-the-clock run to finish out the year,” Erdmann said. “My final stop was at none other than the La Crosse Headquarters where I got fuel at the Fuel Island for my 615th store.”

He also credited the Wisconsin Kwik Trip Enthusiast Club on Facebook for helping to drive his passion for all things Kwik Trip, and said that Kwik Trip has been a part of his daily life for quite some time.

“If I’m at a new store getting to know them, and when I tell them I am going to all these stores, some conversations get very interesting,” Erdmann said. “And as always, I look forward to ‘seeing them next time’.”